I can totally understand a parent’s frustration when your 1 year old child, not only cannot walk yet, but also grunts and doesn’t speak a word other than “Da-Da”. But remember, it is amazing when they actually do speak beyond the grunts and you can sit and watch the development. Dwarfs in general have low muscle tone.

Achons have issues with coordinating breathing due to our facial structure. In addition, we can develop speech delays from constant fluid build up in the ears. Some kids get ear infections often from this fluid build up. My LP son had constant fluid build up from an early age, but never had an ear infection. I, on the other hand, had ear infections all the time. Our son has had three sets of tubes put in to help alleviate the fluid build up. The first two sets were the old-fashioned grommets/PE tubes. The third set are T-tubes, which stay in for a couple of years as opposed to less than a year for the grommets. Grommets lasted less than 9 months before one of them fell out. The tell tail sign was when his speech would get worse or he would talk as if we were deaf or hard of hearing.

After the second pair fell out in 6 months, our ENT doctor suggested the T-tubes. We were hesitant at first because the T-tubes leave a larger hole than the grommets. With the larger hole, leaves a possibility of scar tissue or the hole not closing. From what our doctor said, the chance of the hole not closing and having to surgically close it is 15%. We went back and forth for weeks as to what we should do. We didn’t want him to have to go through getting grommets every year, but we didn’t want the chance of him having scar tissue. In the end, we felt it would be better for our son to get the T-tubes so that he wouldn’t have to undergo surgeries every year. Also, we didn’t want him to lose more time with constant speech delays and hearing issues at a critical age. He was in kindergarten and he was already falling behind due to his hearing and vision.

From our son’s delays as an infant, I learned a lot from his loving speech therapists through the Early Intervention (EI) program. It also helped that we have the financial means to try different products. However, none of these broke the bank or require a loan to get the progress you want to see.

First thing any speech therapist (SLP) will tell you for any child with speech delay: NO MORE SPOUT SIPPY CUPS OR BABY BOTTLES, ESPECIALLY NO BINKYS. These just do not provide the mouth with the exercises to increase the tone to make the sounds. 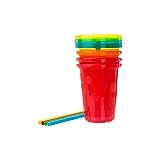 Here are some ideas for sippy cups: The Munchkin Straw Cup and First Years Straw Cup are great to use at home where you can monitor your child at the table. The straws that come with set can be cumbersome to use at first. If you’d like to use a bendy straw that is an option to the included straw. They sell regular bendy straws in large packs at Ikea too!

As much as it is a pain in the butt to use these cups, it will be the best thing for him/her. In a couple of months, you should notice a change in his sounds. Bubble blowing, using an electric toothbrush, etc., will get the tone and the sensory stuff going for speech. Make sure not to use a Sonicare or other electric toothbrush. It will have too much torque for him/her and could cause receding gums.

Another idea is to make a PECs (Picture Exchange) board and cards for on the go. But, what helped our son a lot was using sign language. It was very important for me to teach our son ASL and not just baby sign language. The Baby Talk book helped make some basic words for him. Believe me, saying: “Now, use your words.” was frustrating between us and our son, but his frustration and our frustration got a lot better after his signing got better. And believe us, that frustration of his was big and bold and bad. He hated it when we couldn’t understand what he said. Everyone says “terrible twos” are bad. Try having a 2-year old with speech and walking delay! Before his verbal speech got better, he was signing up to 200 words. Pretty amazing!